Affirmative Action is a process put in place which requires a company to hire more minorities.  When a company looks to hire someone, it should be based on skills, experience and training.  The race of the person applying should not be a determining factor on who to hire.  Looking at each employee’s credentials, I would agree with the senior partner, Samuel Thompson that Susan’s experience would be helpful to the firm.

It could not be argued that diversity is a good thing to have in a company.  The reason given by Thomas Cleveland for needing diversity is questionable.  He appears to think that the main reason Susan should be hired is her race.  She could bring diversity to the firm, but hiring her based on race is showing a level of discrimination.  It shows poor character to be against something, and then do the very thing it is that the person is against.  It is like telling someone it is bad to steal, and then turn around and steal something.

William Wilkins brings up a good point about Susan’s experience.  She has faced the Court of Appeals meaning she is comfortable with those types of cases.  Being licensed in three different states helps expand the area the firm can cover.  It would also be less money spent on getting the licenses, and allows almost immediate expansion to the clients.  William Wilkins does not focus on the race of the candidate, but mentions her qualifications and skills.

Lindsey Kurtz would be the only one that shares the resentment of the friend being overlooked for the position.  She focusses on the school attended, and the race of the candidates.  She would be a non-supporter of the affirmative action.  The amount of languages spoken could help the firm with international cases, but after talking with the senior partners, I would have to decide to go along with their decision, and take the action of accepting the choice that was made.  This acceptance would be solely on the grounds of the qualifications, and skills

This situation would call for notifying someone outside of the company.  With the dangers involved, there is not only a risk to the health of the employees, but a risk to the business staying open.  The owner is taking on a belief in Nozick’s theory, in the essence that the owner’s rights are not to be interfered with even if violating his rights would protect the rights of others.  In the case of protecting the employees, this must be reported, even if it means going against Nozick’s theory.

I would take the case to OSHA, as Karen Parse asked.  They are the administration that regulates the safety standards in a work environment.  It would have to get reported to them to prevent the local officials from hiding the truth of what is going on.  A consequentialist approach would need to be made in order to make the right decision about reporting this.  It must be decided if it would provide the maximum good as a result of filing the report.

Alex Rivera and Jason Rhine are following the owner with the Nozick theory.  To them, they are showing loyalty to the company.  There is no loyalty to the employees.  There are a few consequences to making the report.  One of them is the possibility of being fired.  Others include being demoted, being accused of fraud or lying, or being stopped from getting hired anywhere else in town.  This would force me to move out of the area.

The other side of the coin is the consequences of not reporting it.  It could result in the factory burning down killing whoever gets trapped inside.  People could end up losing jobs because of bad health.  The machines could stop working from getting jammed up by all the dust around.

I would follow the consequentialist ethics in this case, despite the teachings of Nozick.  It is showing a loyalty to both the company, and my coworkers.  By reporting it, the company would have to put in safety measures to avoid incidents.  It provides a safer work environment for the employees.  The changes that would result from this would also help keep the factory open for a lot longer than it would be if it were to burn down. 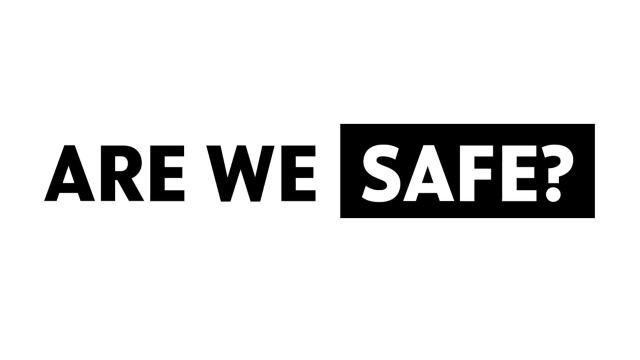 The employee’s health would increase and allow them to be more productive.  More products could get completed and sold, which would make the company more money.  People would have a place to be proud to work at, and less to complain about.  It would improve the employee loyalty knowing that the company cares about their health and safety.

Tony Lord only sees it as a disloyalty because it is forcing him to shut down the factory for a couple of days to fix the problem.  After seeing all the positive outcomes, this choice of action would be supported by the Utilitarianism doctrine as well.  The most happiness for everyone affected by this action would be achieved.  The only ones immediately not happy with it are the owner, area manager and safety coordinator. 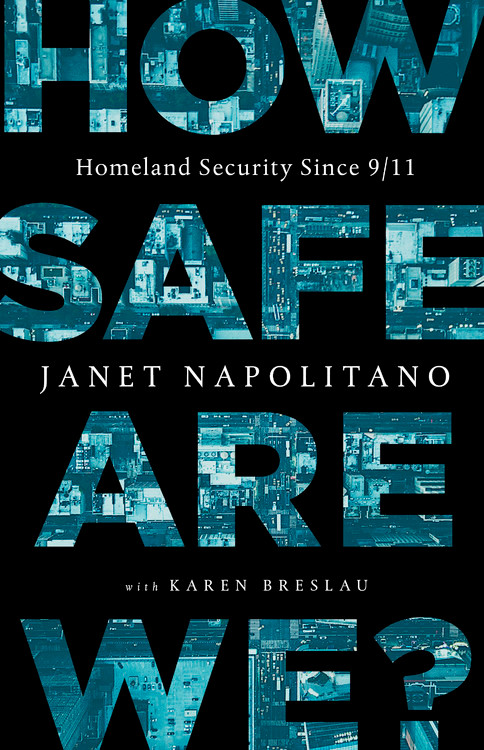 Libertarians would be against reporting this because the liberties of Tony Lord would end up being restricted.  The various theories would either support or oppose the decision to report the situation.  This is where personal morals would also weigh into making the decision I personally would make in going through with the report.  The good outweighs the bad in this case.

Reporting the working conditions is whistleblowing.  There is wrongdoing, illegal and immoral things going on at this factory.  The owner does not want to hear about it because it is disloyal.  The area manager thinks that the higher levels in the company are the professionals.  The safety coordinator sees the reporting as a challenge to his position and skills.  This decision would be morally justified by the Consequentialist and Utilitarian approaches.

Meta-gaming: You have to act like you are in your character’s shoes.  You can not see /me’s through walls, going down a road, logging in/logging out, etc.  Unless you actually “see it” you do not see the /me

IC/OOC Separation: Issues that happen inside of the game need to stay IC and not drag OOC.  Same with issues that happen OOC should not be brought into IC this is to include relationships as well (unless both parties agree obviously).  If this happens, you should probably step back and take a little break.

Chain of command: Feel free to talk to mods/admins about server situations, do not talk to Seb directly about anything.  If situations need to be brought up to him it will be escalated.  If Seb has already taken care of an issue, do not step in to intervene.

Alliance players in Warcraft can make up to 15k an hour farming Moongraze Tenderloin recipe for gold!

And you can do this over and over again.

Moongraze Tenderloin is the meat used in a recipe that can be sold on the Auction House for Alliance players. You can farm this meat in the Draenei starting zone; through a Draenei quest. 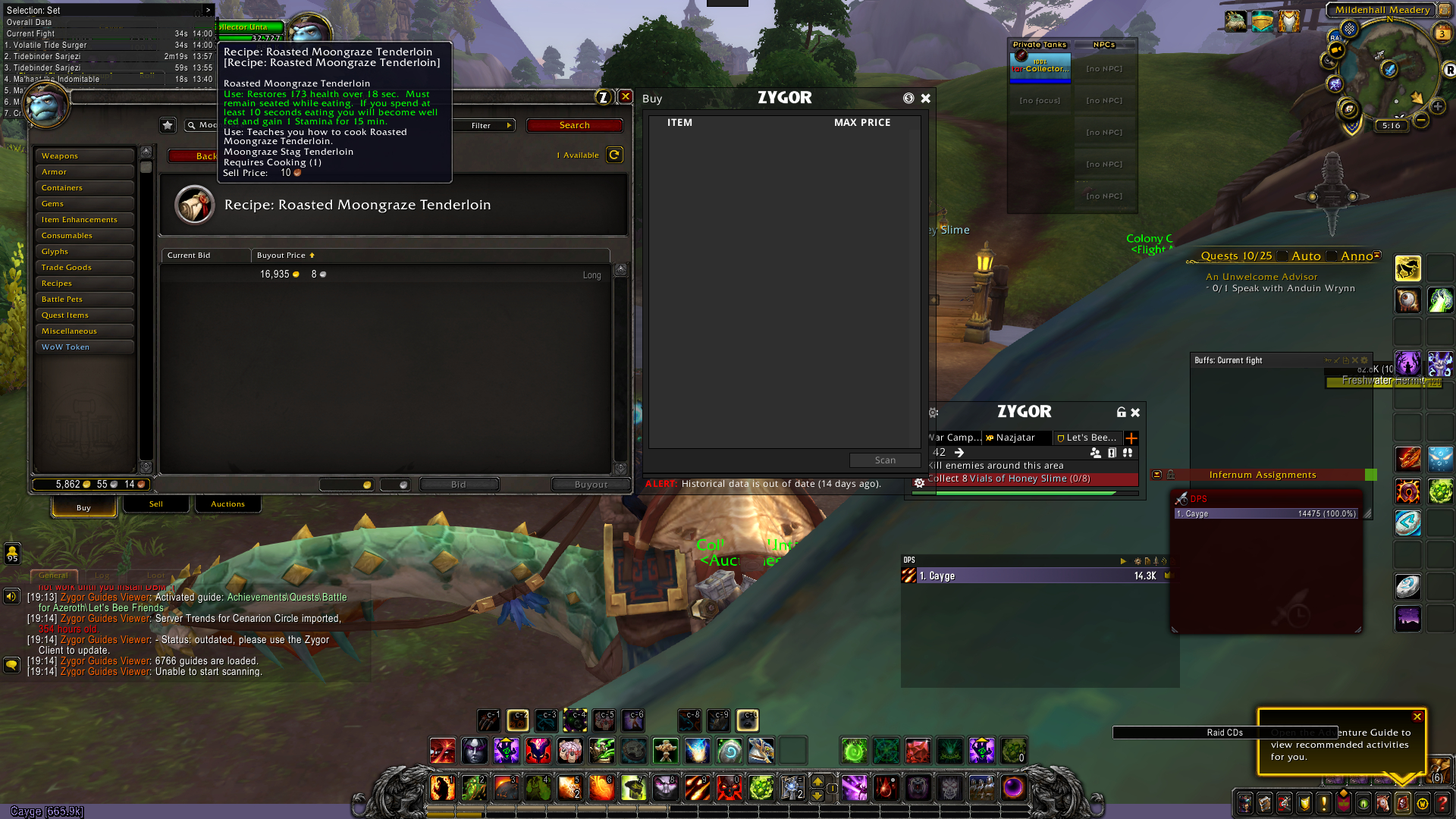 The roasted Moongraze tenderloin recipe sells for around 13,000 gold depending on the server. If you learn the recipe and cook the item, then you will only profit 24 copper from this, farming the mats will get you 150g if you sell the mats in stacks of 6 as per the recipe requirements.

The most profitable way of making money from this would be to make a Draenei and do the quest to get the recipe. If you have the time, you may do this multiple times and at 16k per sell, but not on the same toon.

It’s an easy 16k for a bank alt. You could even be sneaky and make the 16k, send the gold to another toon and then delete the bank alt to do it over and over again.

If you never did the zone on a higher level character, then you could go back and do the starter quests. The quest is not repeatable, but you could do it on different characters.

You can have the moongraze recipe on one toon within an hour to an hour and a half.  IN this time, you could have made 16k gold, not to mention the other greys or little other items you might have picked up along the way

In conclusion, the recipe is easy to get. It can be time-consuming to sell, but in the end, it’ll pay off.

All too often I see disorganized mods folders.

This bothers not just me, but others who help support mods on a regular basis.

There are a number of reasons as to why you might decide you want to pull ALL the files out of a mod, such as Road to Fame, but I can name ONE reason as to why you shouldn’t.

The mod does not work right, you then remove the mod but then you have issues and we see Last exceptions because you left a file in your mods folder.

Why is this a problem?

The problem is there are so many people who do not know that it is okay to put folders in subfolders. There are rules of course. 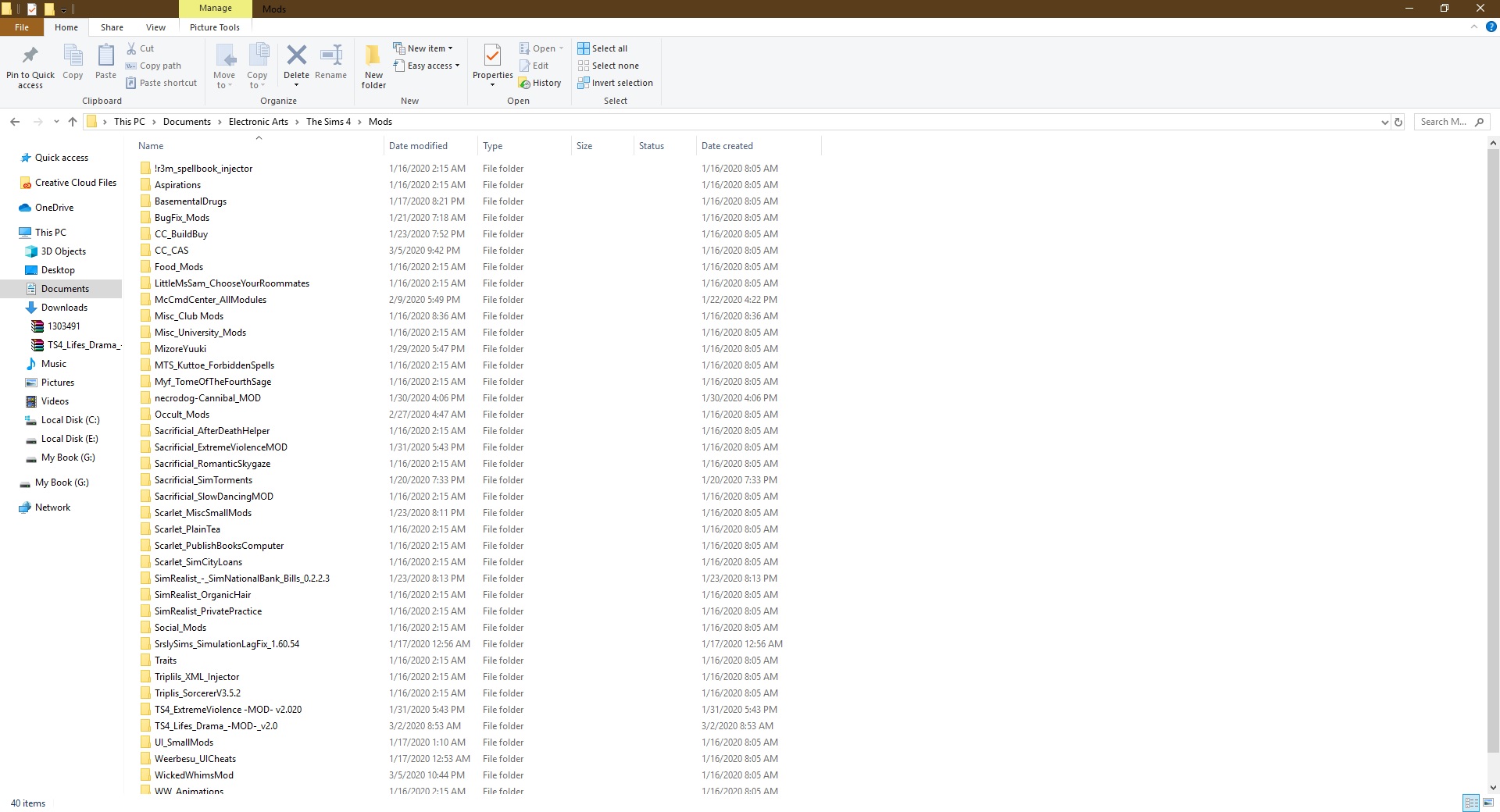 Script mods are mods that use scripts and can only go one folder deep and package files or cc and objects can go five folders deep.  If you place Script Mods more than one folder deep, they will not work. 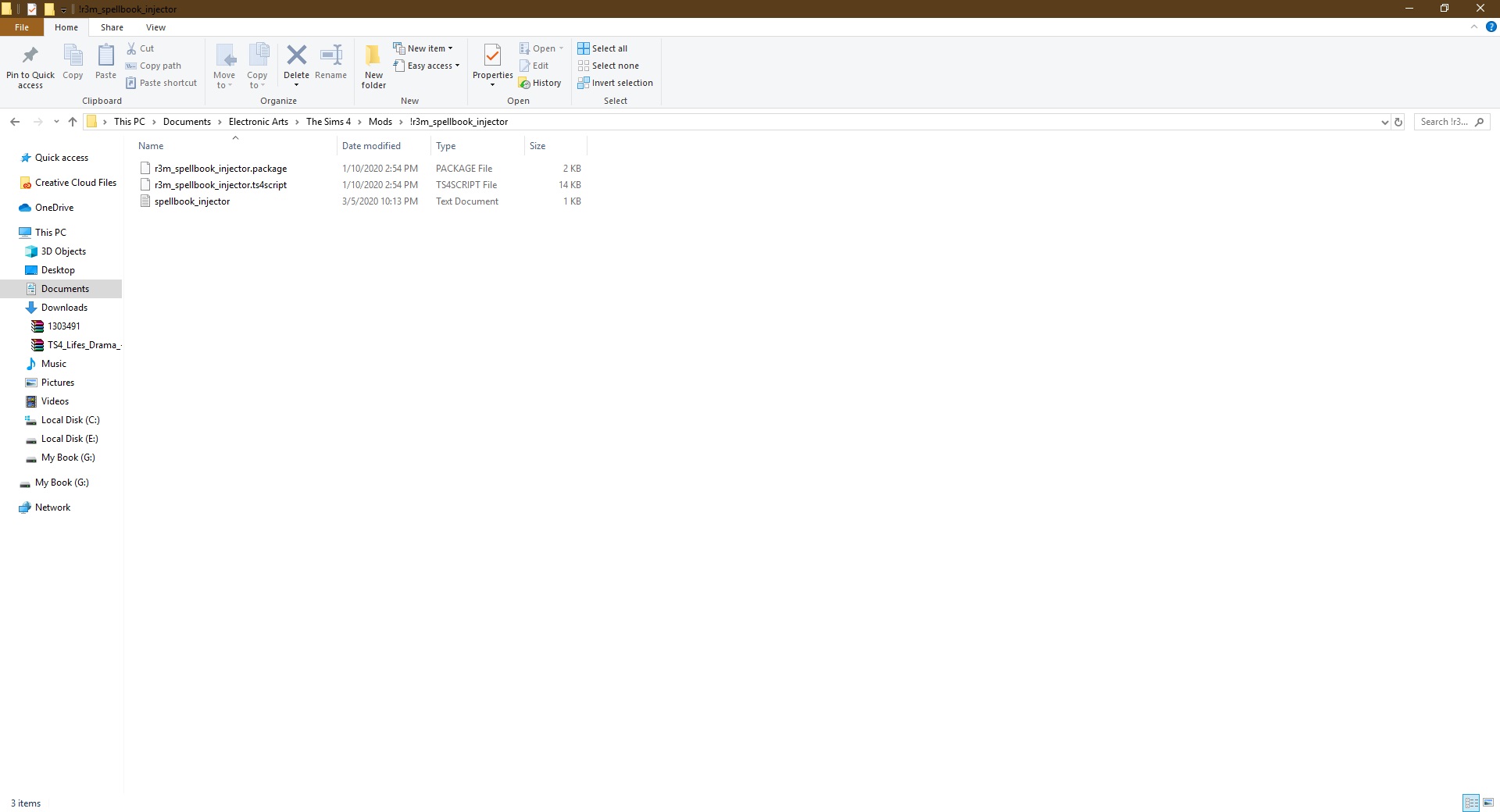 Non-Script mods include custom content and other game-changing mods that do not require scripts to work. These mods and CC can be up to 5 subfolders deep. 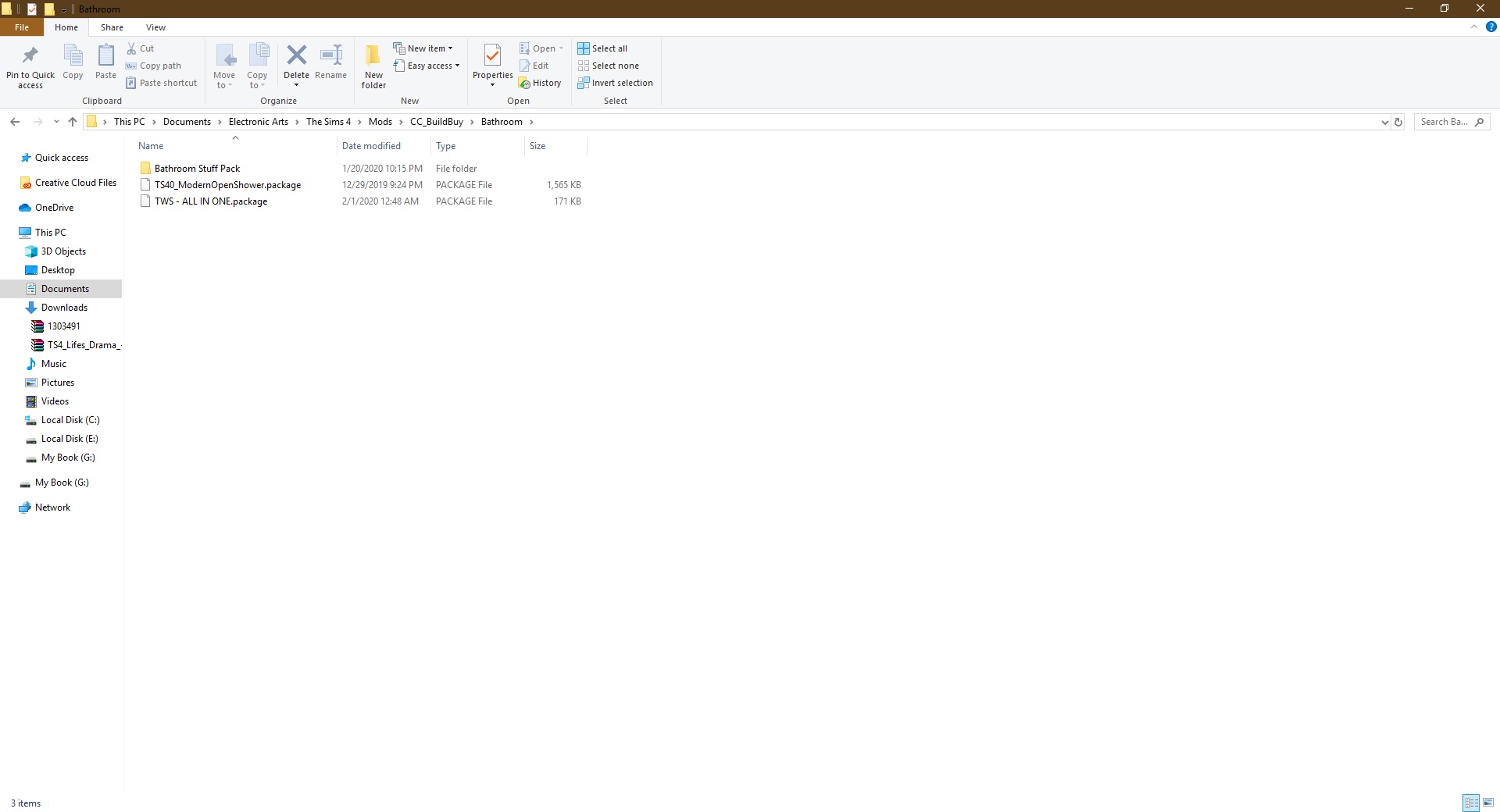 Why is the organization important?

The organization is important so you can keep mods with multiple packages and files like Road to Fame together. All too often, if you go to remove a mod, like Road to Fame and you leave even one file from it can cause a bunch of Last Exceptions and other errors in your game.

CNWW is a mod for bestiality, pedophilia, and rape. According to the rules of any server and the opinion of the Support Team, we do not offer help to those who use it. We will ask you to remove everything from that mod and to provide us with a file detailing the contents of your /Mods folder showing you’ve deleted everything. We will also mark that you have used this mod; this will be your only warning: if you come back with this mod in your lastException.txt file, you will be banned. Failure to follow our rules will result in a permanent ban. Do not try to fight us on this, you will not win. I also personally will NOT assist you when you are using this mod and will advise you to remove it./

There just can not be too many of these!~

Cheat Sheet by Onyxangel (A must-read for beginners–A big thanks for this!)

(compiled from DC search, OnyxAngels cheat sheet, the older cheat sheet and a doc I have saved over time while learning from all of you–Thanks to ALL!)

*This is subject to amendment*

We want people to feel like they are their own. No forced platform choice.